Its very probable that you have already heard of him through his TED talk on "Sixth sense". He is all over twitter and social media now, for the wrong reasons.

Pranav Mistry is my new Indian hero, not because he holds a degree from IIT and MIT, has been called as one of TED's ten best inventors of the world, or because he is Samsung's Director of Research in the US, but because he presented one of the world's first smart watches for Samsung before the entire world and with the global news media watching it and didn't bother even a single bit to hide his Indian accent. 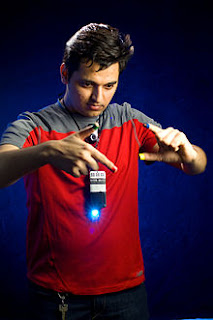 If you already are asking, "And why should he do that?" Congrats! You are not on the dark side.

And what did we Indian's talk about after the event? We made jokes about him on twitter about his accent. And we didn't stop at that, a lot of us made hurtful comments in serious ways as well. Its both enraging and alarming to see that how many of us actually consider it less sophisticated and even shameful to just talk in our own accent. He didn't do anything special, its the same accent you hear by fellow Indians in the chai and chaat shops, in the next table at your restaurant, and probably by your beloved parents and grand parents.

Dear brothers, sisters and hot women of the country, I am not saying I don't do it. I made fun of a north Indian lady, calling my room-mate Benjamin "Ban" instead of "Ben" and saying "Catch-up" instead of Ketchup, I make fun of my Mallu friends (which is almost all my friends) when they mention their 'Ungils from Gelf ' being a self-proclaimed half-mallu myself. I love to say "Raacket-u" instead of Rocket to emphasize that I am a Tamil boy to myself and others. But there is a difference, believe it or not, I AM proud of it. No not of the making fun part, but talking in our own accents part. I love to embrace it, I wish it never dies, but only grows as it is part of who we are, our heritage.

Every other accent in the world is cool isn't it? The English, American, Scottish, French, Italian, German and many European countries speak English in their own accent, influenced by their mother-tongue and is considered cool. Australian accent is cool, and so is the Afro-American way, along with West Indian, Jamaican and Mexican. Except for us isn't it? I have had numerous arguments with my ex-colleagues who firmly believed that our accent 'sucks' for no logical reason.

Why we consider our accent to be inferior is because of the same reason why our country considers 'dark skinned' people as inferior. In Bollywood and rest of Indian movie industry we might have a max of 5 heroines who are dark, and Hollywood and Pop-star world has hundreds. Long live our self-esteem and self-pride in being ourselves and embracing who we are. And all thanks to "the media" for playing a great role in nurturing it all over these years. But at least what makes me happy, is that the same media is today is fighting back to remove all these weeds from the society's thought process and a lot of us have already realized this.

We need to be able to laugh at ourselves, but not feel shameful for being ourselves.

P.S. I wondered why I haven't mentioned some of the prominent Asian countries yet. The Japanese make kick ass video games in their own language, which the rest of the world begs them to translate and release. They have Japanese keyboards all over their country used for their computers, their internet and websites are in their native language. So do the Chinese, who have their own version of search engine even. (Yes Google is not their first choice). Both these countries were far beyond where we started and are far ahead of us today. The amount of pride they have in being themselves is far more than rest of the world put together.

Popular posts from this blog

March 31, 2011
The author is not responsible if people remove you from their facebook friends list (or) start hate clubs for you, after following this guide. I have used * symbol all over the article, please imagine your favorite swear word there while reading. Thank you. I don't know about you, but its one of the most pissing off moments in your life when people point out that you have thin hair. Especially the cursed ones like me, who are blessed to eternally have right amount of thin hair, so that the thinness is visible only when your hair is wet and you are standing under bright sun. Even people who are actually bald will not go through these worst confrontations. Nothing is more irritating than a guy exclaiming amidst a crowd of friends pointing at your hair, and screaming - "Duude ! Everything is visible mann !!". Seriously guys, do you really think, the guy who you are pointing at, doesn't know it. Its his *head dammit. So coming to the post. Here are some ways to re
15 comments
Read more

November 30, 2010
The arena was filled with a sudden silence. It was just announced that he will break his own record. The hundreds of thousands of audience comprising of men, women and children were personally shaken by this decision of their champion. Though the crowd was mixed, the event manager knew that women formed the majority of the crowd. At a far end of the arena, a group of people lit candles to pray for their favorite hero to win this historic event. Infinite banners were held by the faithful fans hoping the camera would catch a glimpse of it anytime. Cameras kept looping through some of the interesting ones. "WE LOVE YOU. PLEASE MARRY ME AND MY SISTERS!" said a banner held by a group of 5 ultra hot Quintuplets sisters with the center one dressed in Princess Leia's costume in Star Wars. All the others sisters were dressed identically in a slightly slutty futuristic costume. They jumped in joy when they saw themselves on the big screen. The other screen switched to a camera po
5 comments
Read more